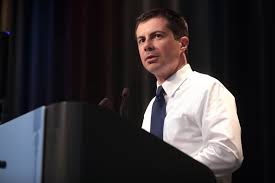 He delivered the more than 8,300 signatures to the Secretary of State’s office Thursday morning. The mayor endorsed the fellow Hoosier in the race to win the Democratic nomination.

He spoke to reporters as he and Pete for America volunteers sat the box of signatures on the desk. “Pete’s ability to give hope to all this disaffected with the status quo is exactly what our state and our country need right now,” he said.

There’s little polling data for the state, however, Buttigieg’s national numbers rose after the Iowa caucus on Monday. There, technical issues resulted in a delay. Though, three days on, data confirmed Buttigieg’s strong performance. While he lost the popular vote to Senator Bernie Sanders, it appears as though he will attain a slight lead in delegates.

Though, many call into question the results, with several citing discrepancies in the data. Still, Buttigieg goes into the next primary state of New Hampshire with a polling surge there. Again, though, he trails Bernie Sanders by 5 to 6 points in most New Hampshire polls.

The national trend showcases a steady rise in support for Bernie Sanders, surpassing the previous assumed frontrunner Vice President Joe Biden. Much of Biden’s loss appears to leak into Buttigieg’s camp, though not enough to propel him over the leading moderate.

An average of national polls places Buttigieg in 5th with less than 9 percent.

Residents of Indiana vote in the Democratic primary on May 5 this year.

Semi-Truck Slow-Roll Protest on I-465