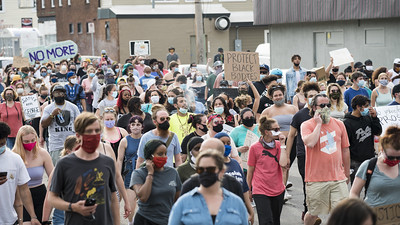 Tensions rose as protesters reached the Governors’ residence in Indianapolis. What many would have expected a shower of teargas and rubber bullets ended differently.

When the protesters arrived, things were looking like they boiling point had been reached. Fortunately, for both police and citizens, a battle did not commence.

Almost 50 police had been called in with rubber bullets, tear gas, batons and zip ties ready to use “reasonable force” if the protesters did not vacate the area.

This put pressure on Malik Muhammad who had marched the protesters 5 miles through the city.

“When we got there and they told us we had to turn around or they’d shoot, I felt like we’d done nothing. I felt like I’d made these people march for five miles for nothing.”

“I was not willing to turn them around without anything. Unless they marched with us, we were not going to turn around.”

While the compromise might seem like a positive thing, others are not sure this is the best move.

“Making this real clear. We don’t shake hands with the enemy.”

This comes at a time of uncertainty. With both sides looking for resolution to race-based police brutality and the justice for George Floyd, tensions are extremely high.

With cities like Los Angeles and Minneapolis being devastated with tear gas and fires, it is good to see a positive outcome to some resolutions.

Protests continue across the country as the death of George Floyd has put the black community and police at odds with one another.

This is happening as President Donald Trump has fled to the White House basement and continues to Tweet against the protests in a stance that does not give real guidance to a divided country. As protests continue, the effects will continue.

Proposal to Opt-Out of U.S. Opioid Settlement Worth Millions is Approved